September 11 – Where were you?

Posted on September 11, 2011 by thisnestisbest

I didn’t know if I would post anything regarding the 10th anniversary of 9/11, but prompted by another blog that I read, Sidewalk Ready, I’m sharing where I was on that day.

I was a junior in college at Western Michigan University.  At that time, my normal mornings began watching cartoons on Nickelodeon since I usually fell asleep to Nick at Nite.  I don’t remember if I changed the channel that morning or if even Nickelodeon was playing the footage of New York City, but I remember watching the tower smoke after the first plane hit.  I continued getting ready for my morning class because at that time no one even realized it was a terrorist attack – yes, it was scary and horrible, but for at least a short while, it seemed to be an accident.  It seems so obvious in retrospect, but at the time I clearly remember the confusion and naive speculation involved.  There was a sense of childlike innocence for the entire country that was shattered that morning.  I imagine people must have felt similarly during the attack on Pearl Harbor.

I even walked to class that morning, leaving the television and non-stop coverage.  In the library, I heard that all classes would be cancelled for the remainder of the day.  That year I was a Resident Assistant in the dorms so I hung signs in the halls letting the students know of the class cancellation.  I remember a student giving a cheer of excitement.  I can only imagine how he felt when he finally realized the enormity of the day and how petty a class cancellation is in comparison to what people lost.

Mr. Lemon and I had not yet even met, but he was also at Western Michigan University and he very clearly remembers eating his cereal and watching the second airplane hit the tower.  I assume I didn’t actually see that because I don’t remember the shock of it.  Mr. Lemon is actually flying today which made us both a bit nervous.  He texted “I love you” right before he boarded the plane.  Of course this choked me up and I imagined all of the people ten years ago who were not able to give such a message to their loved ones.

Of course, those of us who lived through that day can never forget it. 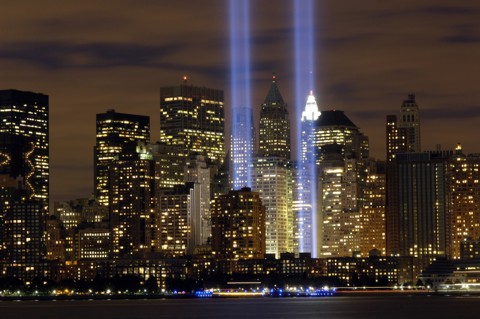 This entry was posted in It's My life. Bookmark the permalink.

1 Response to September 11 – Where were you?